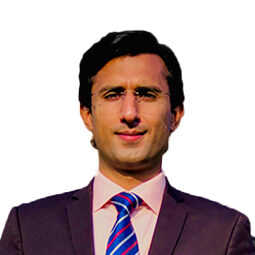 Hassan Arshad Gondal is an Advocate Lahore High Court and Political Scientist. He teaches at UCP’s Department of Political Science and International Relations. He graduated from Punjab University Law College with an LLB (Hons). He also holds an MPhil Political Science from GC University, Lahore. He received a certificate from LUMS in Basics of English Grammar and Structure, as well.

Mr. Gondal worked as a Research Associate at Khosa Law Chambers after graduating from law school until 2020. He has been teaching Political Science and Constitutional Law to CSS aspirants at various institutes since then. In addition to his professional experience, he served as Vice Chairman of the Lahore High Court Bar Association’s Legal Education Committee, a body tasked with overseeing and improving legal education provided by various public and private institutes.

His research and interests include human rights, constitutional law, constitutionalism and the rule of law, political judges, political philosophy and ideology politics. His MPhil dissertation was titled Judicial Activism in Pakistan: Entanglement in Government Organs 2009-2019, and it covered a decade of Supreme Court of Pakistan inference in the domains of executive and legislature, as well as its impact on political process and constitutionalism.