Why Has Smog Become a Serious Health Concern for Pakistanis?

Home » Blog » Why Has Smog Become a Serious Health Concern for Pakistanis?

Why Has Smog Become a Serious Health Concern for Pakistanis? 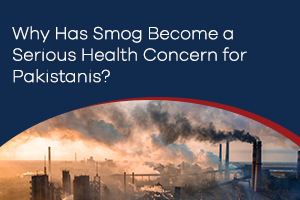 The current air quality index for Lahore shows that the air is unhealthy because of severe air pollution. And as winter is coming, so is smog in Lahore.

Around 7 million people per year die from air pollution worldwide, according to the World Health Organization (WHO), 4.2 million of which are due to exposure to ambient air pollution. In addition, 9 out of 10 people breathe air that exceeds WHO guideline limits for pollutants, with low-and middle-income countries suffering the most, including Pakistan.

Do you know that Lahore ranked first in the list of most polluted cities in the world in 2021 with an air pollution level of 108 µg/m3? Even the present situation of Lahore’s air is alarming as its PM2.5 concentration is 14.6 times the WHO annual air quality guideline value.

One of the major reasons is that it gets surrounded by a thick layer of smog in the winter season. Furthermore, the city’s air quality has worsened as a result of increasing urbanization and industrialization.

Smog, often known as smoke fog, is a type of severe air pollution. The term “smog,” a combination of the words “smoke” and “fog,” was first used to describe smoky fog in the early 20th century because of its opacity and odour.

What is Smog Composed of?

Smog is a form of air pollution that is a combination of numerous toxic effluents from industrial and residential activities. These activities occur both naturally and artificially as everything is just tossed into the atmosphere without being processed. It leads to air pollution and harm to the environment as well as every existing living being on the planet.

The main components of the smog are as follows:

These elements, or pollutants, that make up smog are chemically highly reactive and extremely dangerous to both people and various animals.

There are two types of smog:

The smog we suffer from is photochemical smog. And it forms when sunlight combines with nitrogen oxides and at least one volatile organic compound (VOC) in the atmosphere.

Causes of Smog in Lahore, Pakistan

In Pakistan, Lahore is the city that has been affected the most by smog in the country over the last few years. The city is overpopulated and it is an industrialized region with a huge traffic problem.

So, the reasons for smog in Lahore are vehicle emissions, industrial pollution, fossil-fuel-fired power stations, waste-burning, and coal burned by thousands of brick kilns spread over the region. These are all contributors to the problem.

These emissions result in:

So, when sunlight strikes these compounds, they produce airborne particles and ground-level ozone, causing smog in Punjab. It leads to injurious health issues and causes detrimental effects on the environment.

The effects of air pollution on living organisms will not only harm human and animal health but will also affect the entire environment. Various geographical conditions, global temperature changes, and environmental variations all have an impact on human health and the environment, including animal life.

A lot of factors influence the impact of smog on your health and general well-being. However, let us look at the people who are most vulnerable to the hazardous effects of smog:

Smog in Lahore causes the air index to deteriorate, which leads to health issues for the residents. We have described the diseases in people caused by smog in Punjab.

Asthma is one of the most frequent disorders brought on by polluted air. It constricts and swells the airways and creates excess mucus, making breathing difficult. Asthma is a chronic air pollution disease that leads to severe shortness of breath, making even daily, routine activities difficult.

Bronchitis is caused by prolonged exposure to increased levels of air pollution, particularly a high percentage of sulfur dioxide and nitrogen dioxide in the air, which causes bronchitis. It is an acute inflammation of the lining of the bronchial tubes that transport air to and from the lungs. Bronchitis is characterized by shortness of breath and prolonged, intense coughing with thick mucus.

COPD is a chronic disorder that causes obstruction in the airways of the lungs, causing difficulty breathing, wheezing, and a chronic cough. COPD, one of the most frequent diseases caused by air pollution, causes irreversible damage to the lungs and can progress to severe symptoms such as bronchitis and emphysema.

Prenatal and neonatal exposure to harmful air can result in air pollution disorders and birth abnormalities. Premature birth, low birth weight, persistent and chronic colds and coughs, various allergies, and even neurological abnormalities are all serious concerns. As a result, pregnant women are advised to ensure a steady supply of clean, fresh, and unpolluted air.

Prenatal and neonatal exposure to polluted air can also weaken immunity, putting the baby vulnerable to a variety of health problems. Diseases caused by smog in Punjab in newborns can lead to serious health problems later in life.

Prolonged exposure to particulate matter pollution and toxic chemicals can impair blood vessel function and promote arterial calcification. The severity of heart disease caused by air pollution is determined by the type of pollutant and the duration of exposure.

Pneumonia is a serious, occasionally fatal disease that affects both children and the elderly and is mostly brought on by bacteria, fungi, and parasites in polluted air. It is a lung infection that causes pus to fill the air sacs in one or both lungs, causing difficulty breathing, phlegm-filled coughs, chills, and fever.

Smog in Lahore is also causing leukemia in the residents of the city. Leukemia is a cancer of the blood and bone marrow that causes bruising, joint and bone pain, bleeding, weight loss, fever, and other symptoms. Exposure to radiation and harmful pollutants in the air, family history, smoking, and other factors are major causes of leukemia.

Toxic chemicals in the air, particularly those emitted by factories, can trigger severe reactions in some individuals, resulting in asphyxiation and death. The number of young individuals dying as a result of air pollution-related illnesses is on the rise.

Plants and animals play essential roles in the natural environment. Humans use them for food, business, and other purposes. Smog also affects them dangerously.

2. Effects of Smog on Animals

The effects of smog in Lahore make it hard for animals to adapt to or survive in such dangerous conditions. Air pollution can kill or sicken various animal species.

3. Effects of Smog on Plants

Smog in Punjab restricts plant development and can affect crops, trees, and vegetation. It impairs their ability to fight infections, making them more prone to sickness.

Air pollution, in addition to endangering human health, can have a wide range of environmental implications:

The smog in Punjab is a serious condition and you need to be very careful if you do not want to get sick as smog season is coming. So, we have described some of the precautionary measures for you that you can follow when smog hits Lahore.

Due to these harmful emissions, notably transboundary air pollution, air quality is declining day by day in cities. As a result, Lahore, the provincial capital, is one of the most polluted cities in the world, and the smog layer will thicken in the upcoming days.

Therefore, in order to reduce smog in Lahore, immediate action must be taken to address this issue. Both public and private institutions should adopt policies to reduce pollution from sources, particularly the emissions of particulate matter and nitrogen oxides.