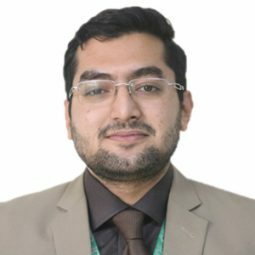 Mr. Hassan Ahmad is an enthusiastic, self-motivated, reliable and organized researcher and an academician of high potential. He is equipped with honesty, pride, confidence, hard work and an intelligent mind. He has been currently working as LECTURER in Pharmaceutics at Faculty of Pharmacy, University of Central Punjab, Lahore from Dec. 2016 to date. Previously, he worked at the same position at AKHTAR SAEED COLLEGE OF PHARMACEUTICAL SCIENCES, LAHORE for 3 years. Mr. Hassan has completed his Master of Philosophy (M.Phil.) in Pharmaceutical sciences from The Islamia University of Bahawalpur, Pakistan in 2013. He did his Pharm.D (Doctor of Pharmacy) degree from the same University in 2010. Since then he has been teaching pharmacy courses at Pharm.D level. He also has several research publications in H.E.C. impact factor & peer-reviewed journals. Besides, he has also worked as a PHARMACIST at different Community Pharmacy setups.