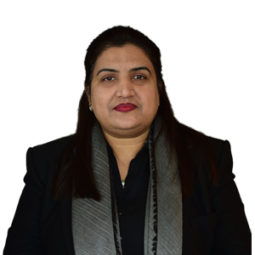 Javaria Qais Joiya is working as Assistant Professor, School of Accountancy and Finance, Faculty of Management Sciences, University of Central Punjab, Lahore. She has done her M. Phil and LLB from University of the Punjab, Lahore. In addition, she has done Diploma in Environmental Law, Diploma in Property Rights Law, and Diploma in Taxation Law from PU Law College, Lahore. She has 10 years of Teaching Experience. In last 5 years she became a Climate Reality Leader learnt from Al-Gore (Former US Vice President) and his team in Chicago (USA)2013, Melbourne (Australia) 2014, Cedar Rapids, Iowa,(USA) 2015, Miami, Florida, (USA) 2015 (Participated as Mentor),Houston, Texas (USA) 2016 (Participated as Mentor). As Climate Reality Leader she has delivered power point presentations to university students, participants of church in a poorer urban community, to the officers of the motorway police and school students and has published her views through discussions on journalistic forums in the most popular Urdu daily newspapers of Pakistan as well as English language and TV discussions. In 2015 and 2016, she was recognized by the organization of Pope Frances for her role as inter-religious coordinator on Climate Change. Apart from Teaching her responsibilities in UCP is to conduct UCP radio Program for SAF and in-charge UCP reading club ‘Lets Read SAFians”. She also published three volumes of students’ newspaper publications on current Issues from UCP platform.